Have you been seeing your friends post about #DDDetainedInAtlanta and wondering what it was about? Here is the CliffsNotes version of what happened to Kalamazoo College junior Kylah Simmons on her return home to the United States, and why I think her story is important to people who stutter (and just about everyone else).

Detained for Stuttering at the Atlanta Airport

On Thursday, January 21st, 2016, Ms. Simmons, an American citizen with a squeaky clean record, was coming back from a six month study abroad program.  She flew into the Atlanta International Airport, and while going through customs she responded and stuttered on “Costa Rica” when asked where she was flying from.  She was then brought to another officer who asked her “Do you have a problem?” to which she responded “I have a speech impediment and stutter.”

You would think that the story stopped there, but it didn’t.  Ms. Simmons reported that she was then detained in another section of customs for approximately an hour and missed her flight home to her family.  While she was detained, the customs officials said she was “lying and dishonest.”  Like many of us who stutter, Ms. Simmons didn’t stutter on every word (all you fluent people see horrible examples of stuttering in the media-there is great variety in how we speak) and this made the officer detaining her suspicious.  He also continued to call Ms. Simmons’ stuttering a problem, to which she responded (keeping her stuttering composure!) “My stuttering is not a problem; it is a personal challenge that I face.”

Upon being released, she reported what happened to her to the supervisor of US Customs and Border Protection, and followed up with a letter documenting her experience.  Ms. Simmons has not heard a response from US Customs or the Atlanta International Airport and they have not responded to requests for comment from StutterTalk.com, where she told her story the next day. Ms. Simmons has stated that she doesn’t want anyone fired, but she would like the staff at the Atlanta Airport to have some training on communicating with a person who stutters, because she doesn’t want this to happen to others.  This is because that is something many of us are afraid of.  When her story came out so many of us who stutter responded with “This has been my fear realized.”

Why is it important that this happened at the Atlanta Airport?

In July there will be an international conference of people who stutter (combination of the International Stuttering Association and the National Stuttering Association) and guess where it is going to be?  Atlanta!  This means that likely over one thousand people who stutter will be going through the very airport that Ms. Simmons was detained in.  The ATL will be up to their eyeballs in people who stutter and if they are going to detain us, they don’t have enough rooms!  Plus, as an American who fights for Disability justice, I am proud of what my country has done on many Disability fronts and I want people from other countries to experience the freedom to have diverse speech and not meet discrimination because of it, especially hs they are entering and leaving the US.  So, Atlanta Airport–especially customs–make us proud and get some training in how to talk to people who stutter!  Come July, it will save you a lot of time and resources!

After Ms. Simmons told her story on StutterTalk.com, the host, Peter Reitzes, followed up with a second show where he interviewed Corporal Phil Peet, who offered some advice and guidelines for customs officials, demystifying the customs process for people who stutter.

A Twitter campaign was also launched to help educate ATL and the world about the need for training.  People who stutter and their allies sounded off about what the Atlanta Airport and the world needs to know about stuttering.  You can find it under #DDDetainedInAtlanta on Twitter.  There were memes made, advice and opinions raised, and videos.

As with most issues there are little and big things you and the organizations you are associated with can do to help! Here are some suggestions:

For people who stutter who are traveling:

Although I am not well traveled, especially internationally, the past few days I have come across some important things to remember while flying.  Please feel free to share more in the comments sections.

-You may need to disclose that you stutter (which not all of us are comfortable doing) in order to explain your speech.  Since this first posted, Ms. Simmons, in collaboration with The Stuttering Foundation, have created and released a travel card.  The card, that you can print for free from here describes what stuttering is.  My guess is that such a card is good for people who stutter to carry all the time.  It might be presented when questioned by police at a traffic stop or at the airport.

-Know your rights.  Listen to Corporal Peet’s interview and know what to expect and how to react when going through customs or similar processes.  As he emphasized: if communication with personnel isn’t going well, ask to speak to a supervisor.

-If you feel discriminated against by customs or other government agencies, you can file a complaint with the Office of Civil Rights who will investigate.

This is nowhere near a complete list of a call for action.  If you have other recommendations, please add them below.

This past week Kylah Simmons (pictured below) was coming back from a study abroad trip in Costa Rica when she was detained for stuttering at the Atlanta Airport. You can hear and read more about her experience on her interview with StutterTalk.

It is always alarming when people who stutter are detained, discriminated against or treated badly because of their speech, but in this case the Atlanta Airport better shape up and fast!  The 11th World Congress on Stuttering teams up with the National Stuttering Association in July for a conference.  Guess where?  Atlanta!!  Literally, there will be over one thousand people who stutter (including myself) going through that very airport.  Needless to say, they better get educated!

What better way to educate the Atlanta Airport and the rest of the world than through a Twitter campaign!

Let’s take to Twitter to educate the Atlanta Airport and the world about stuttering under the hashtag #DDDetainedInAtlanta.  Be sure to tag their Twitter handle: @ATLairport.  Tweet what you think they should know and advocate for more training of their employees—especially for the influx of people who stutter in July!  Believe me Atlanta Airport, you don’t have enough rooms to detain us in July!!

We have a voice! 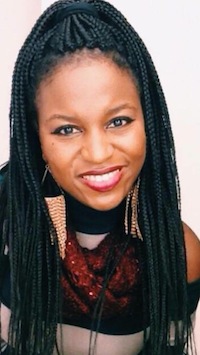 Nina G, stand up comedian, author, Disability advocate and professional speaker is happy to announce her new collaboration with the National Stuttering Association (NSA), an organization that empowers people who stutter and builds community.

Every six months Nina chooses a new organization to donate a portion of her professional speaking fees to worthy nonprofit organizations. The organizations Nina chooses will also be featured on her social media outlets to increase their visibility . The first organization selected was YO! Disabled and proud. Yo! connects, organizes and educates youth with disabilities ages 16-28 throughout California. Nina raised hundreds of dollars for the organization in the six months collaborated with YO! She now turns her attention to the NSA.

The NSA, founded in 1977, is the largest support group organization in the world for people who stutter. It provides peer-facilitated chapter meetings that provide self-help, support, and education for those who stutter–as well as for those interested in stuttering. Nina’s relationship started with the NSA, when it was the National Stuttering Project, when she was in high school. One late night, while watching TV, she saw an advertisement for an organization of people who stuttered. Nina contacted the organization and began to volunteer. She discovered that it was ok to stutter. Her way of speaking was validated by others who were like her and successful adults. After taking a 15 year break from the NSA, Nina attended the 2008 conference in Arizona where she again discovered how much her stuttering was impacting her life. It wasn’t because of the speech itself but because of her own issues about how she saw herself. The conference was a catalyst for making changes in her life. Within six months after the conference, she began doing stand up comedy, a childhood dream that she never thought she would achieve because of her speech.
Nina adds “at the NSA conference in 2008 I saw myself reflected in the people who attended. Beautiful, smart, and amazing people. I knew then that I was holding myself back. I wasn’t talking as much as I wanted to because I was trying to make others comfortable with my speech. I thought, “why am I holding myself back in social situations when I would not want this for others? That is when I started to think about doing stand up and have been doing it steadily for the past six years”

From December to July, Nina will be donating a portion of the proceeds from her speaking engagements to the NSA for the scholarship program that sponsors people who stutter and families to come to the the annual conference (2016 is in Atlanta).

Video where Nina G is asked, “when did you start loving yourself?” and where she talks about the 2008 conference: https://www.youtube.com/watch?v=Ptaf9ST3dFE

I am proud to the first guest of 2016 on StutterTalk! Please check it out at http://stuttertalk.com/what-causes-stuttering-with-nina-g-ep-563/. Plus listen to the end for my special announcement on what organization I am sponsoring for the first part of 2016!

Insights from a stuttering comedian with dyslexia. These are my unedited thoughts. Grammar and spelling doesn't count on blogging, especially since it did I would never post!