According to Valerie Russ of philly.com:

“A University of Pennsylvania graduate student says a Starbucks barista in West Philadelphia mocked him for his stuttering disorder last week — just 29 days after the company closed its nearly 800 U.S. stores for anti-bias training following the wrongful arrests of two black men at a Center City store.

The 28-year-old student, who is pursuing a doctorate at the Wharton School, said he was shocked when he ordered an iced coffee at a Starbucks in University City, only to have the barista mimic his name by saying: “OK, S-S-Sam.

It was even more disturbing when he realized while walking back to his office that the barista had written his name on the cup as ‘SSSam.’”

Why is this such a big issue for the Stuttering Community?

Many of us dread ordering in a restaurant and even worse saying our names, because so many of us stutter on it.  Countless times we have had people say things like, “did you forget your own name?”  Being made fun of when ordering your coffee isn’t a great way to start the day and many of us brace ourselves to the reactions others have to our speech.

Starbucks, and other restaurants need to do a better job educating their staff who interact with the public.  Making fun of your customer is unacceptable!  Let’s educate not only Starbucks but anyone who deals with the public about stuttering and how we want people to react to our speech.

Tweet, Facebook and Instagram what you want @starbucks and others to know.  Use your voice and stand up! If you don’t stutter, you can support by helping us spread the word about how we want to be treated.  The Disability community has the saying “nothing about us without us.”  People need to know that people who stutter have a voice and that voice needs to be heard by everyone! 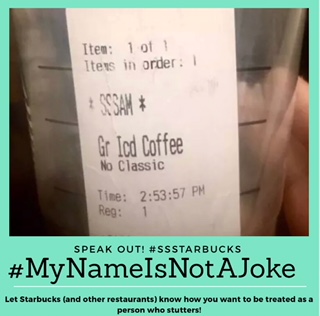 Insights from a stuttering comedian with dyslexia. These are my unedited thoughts. Grammar and spelling doesn't count on blogging, especially since it did I would never post!